Dolomites Alta Via 2 continues with Day 4: Passo Pordoi to Malga Ciapela. Fatigue sets in, Marmolada is completely clouded and it rains all day. Awesome day in hindsight! Our Day 3 of on the Sella Group was challenging and even dangerous because of the weather, probably making it one of the most memorable hiking days ever. The contrast was great since our Day 4 posed no challenges whatsoever and we knew we missed out on some of the greatest views ever – Marmolada for us stayed in the clouds.

All that said, when we woke up in the Hotel Savoia Passo Pordoi we were tired and were really starting to feel the aches of the days past accumulating. This was expected since it was the 4th day, after all, and our days until then had been demanding. Looking at maps and based on what we knew, we had planned this to be our “take it easy” day anyway. We were hoping to walk on the Vièl dal Pan at our leisurely pace taking selfies against the Marmolada.

Passo Pordoi is on the south end of the Sella Ronda, a spectacular ski route that takes you around the Sella Group. You can ski around the Sella Group in either direction on prepared slopes. A fairly competent skier can easily do the round in a day. You can also do it on a bike, but haven’t done that so not sure what it entails. Similar to Passo Gardena on the north end of the circuit, there’s a ski area to cross. The number if lifts and ski infrastructure made it feel a bit more pronounced here and to be honest, it was a bit of downer to start the day there instead of some beautiful Rifugio in the mountains.

After breakfast, we started walking up on trail 601 which started right next to the hotel. It gently climbs up about 200 meters in altitude (~650 ft) to a couple of Rifugios and tops of ski lifts from both east and west. This is a place you need to go through to complete the Sella Ronda ski circuit. This particular spot in the Dolomites is more beautiful in the winter, in my opinion. 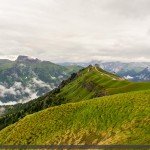 On to the Vièl dal Pan on Alta Via 2

From here the 601 continues east as the Vièl dal Pan, a historic route that links Passo Pordoi to Passo Fedaia. This path has historically been used by merchants from Belluno for transferring flour, the key ingredient for bread – hence the name Viél dal Pan. This route is right across the valley below from Marmolada, highest mountain in the Dolomites, so on a nice day you get your most impressive Marmolada selfies from here. And to top it off it’s very easy and accessible by ski lifts from Canazei to the west and Arabba to the north, so if you’re in these areas, you could do a nice, easy day hike here. With beautiful views of the Marmolada! 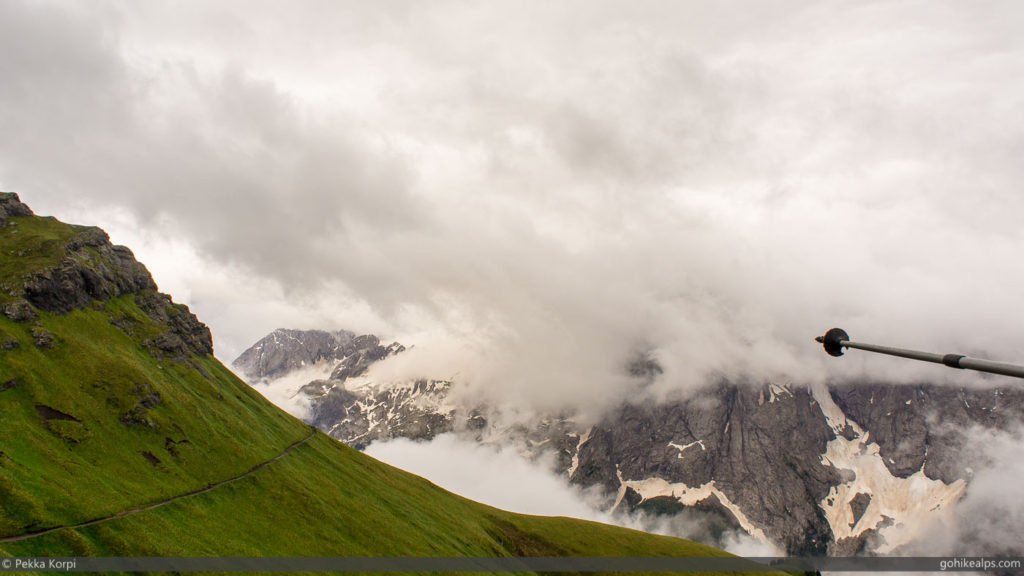 Marmolada in the Clouds

As for the Marmolada selfies, you can see from the photos above they turned out to be selfies with clouds and no Marmolada. There was a small break in the rain, just enough to pull out my camera and take a couple of quick shots.

It was pretty amazing the entire time on the Viél dal Pan or the day before on the Sella Group, we were not able to catch even a glimpse of the Marmolada glacier. This is one of the must have experiences on Alta Via 2! See the pic below from Wikipedia. This is what we were hoping to see…

Along the path you eventually come up to Rifugio Viél dal Pan (http://www.rifugiovieldalpan.com/ ). It was very quiet there, probably due to the rain. Because of the easy access and the views, it’s probably very busy at times. We just stopped for coffee since it was only a little way from where we started. From the Rifugio eastwards, the path narrows down to, well, a path instead of a small road it was until then.

The path continued on the mountainside with the Marmolada on the other side of the valley the entire time. Eventually it splits South (down) towards Lago Fedeia and Rifugio Castiglioni and North (up) towards Rif. L Gorza, accessible by lift from Arabba. The latter is interesting if you’re doing a day trip, Alta Via 2 goes down to the lake. The path down was slippery in the rain, here and there, but not problematic. Once down at the lake, Rifugio Castiglioni provided us with shelter and refreshments.

This is the point where you need to choose how to get around or over the Marmolada. There’s 3 choices:

For us this was an easy choice: we didn’t have crampons for the glacier and we DID want to go on the Marmolada so 2) and 3) were not really even seriously talked about. After our coffees and refreshments at Rif. Castiglioni we decided to go back into the rain and walk to the other end of Lago Fedeia, to Passo Fedeia with hopes that the rain would stop. It didn’t.

Rifugio Passo Fedeia at Passo Fedeia lured us in with a promise of nice pizza. We decided to have lunch there and ponder our situation. Looking at our map and the Cicerone book lead us to the conclusion that from there to Malga Ciapela would be a rather boring, downhill roadside walk. I guess that’s exaggerating a but really, it looked boring. Even the book says a lot of people choose to take the bus down from here. Given the weather and our borderline discouraged mood we were in, we decided to opt for the bus.

Just a note on something that would have been really, really cool to do while there: Via Ferrata Eterna (Brigata Cadore), which is accessible from Passo Fedeia. To my understanding this is the longest Via Ferrata in the Dolomites and has been recently re-equipped. It goes up the east side of the Marmolada to the second Malga Ciapela cable car station so you can get down from there. Actually, that seems to be the only feasible option.

Judging by the video by Gabo (check it out here: https://www.youtube.com/watch?v=0Fel3sLlBd4), this is not something I would try with all the AV2 hiking gear on my back. However, if there was an extra day to spend, I might give it a try for the Via Ferrata alone. There’s lots of great Via Ferratas in the region and there’s no particular reason I got intrigued by this one, it just somehow allured me. More info if this interests you:

Would love to hear comments if anybody did this on their Alta Via 2!

Malga Ciapela is a small resort town right under the Marmolada, with a cable car that takes you all the way to the top. It’s a part of the Dolomiti Superski area and the Sella Ronda is accessible from here, too. At least in good weather. When we got off the bus it was still afternoon. The weather didn’t allow for going up the Marmolada so we just chose to take some time off and chill. There’s a few hotels to choose from and some shops. We booked ourselves into the Tyrolia which we found to be good value.

A major disappointment, though: in Malga Ciapela I could not find a map for our planned Day 6, which would have covered the area south of Passo di San Pellegrino, our target for Day 5. I had not bought that map in Brixen because we did have a deadline and back there it was unclear if we would have made it far enough to use that map. Just plain stupid of me not to get it there. I even looked at it at the local Intersport store. This caused us to change our plan for Day 6. Note to the shopkeepers at Malga Ciapela: Add this map to your inventory: Pale di San Martino 022 GPS

Lesson learned: Get your maps beforehand, just in case. They’re inexpensive and they don’t really weight that much. I appreciate people cutting down on the weight to carry as much as possible but I think this is the wrong place to save. Some people buy all the maps beforehand and then to reduce their weight, they cut them up to only show the relevant parts. If you’re conscious about the weight, this might make sense to you. At least in my current state of being, I would have happily carried the extra map.

After some shopping and afternoon beers, we made our way back to the hotel for a nice, hot shower, a nap and dinner. The weather forecast was looking better for the next day so we decided that if the weather was clear, we would start our tomorrow with a trip up to the Marmolada and only then continue our Day 5 towards Passo di San Pellegrino. As always on these trips, sleep came easy.

For this section of the Dolomites Alta Via 2, you need:

All in all, another great day out. You need to get some rain to appreciate the sunshine. Would be great to hear your thoughts, especially if you’ve done the Via Ferrata Eterna or the climbers’ variant!