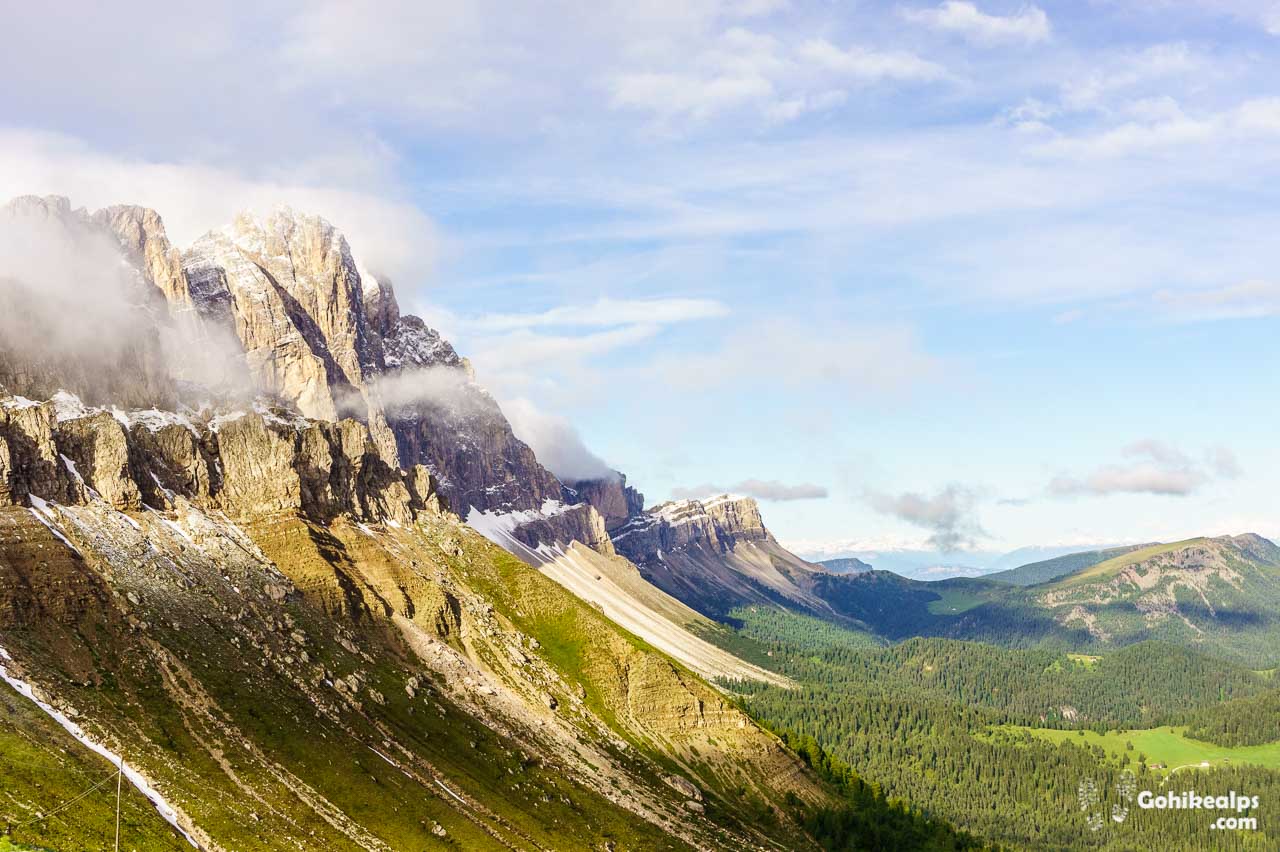 Day 1 of Dolomites Alta Via 2 was wet. It literally rained all day. The suggested first day suggested by our guidebook (Gillian Price: Trekking in the Dolomites) starts from Brixen (or Bressanone in Italian) and ends at Rifugio Bressanone 5½ hours later.

It’s all uphill to Rifugion Bressanone, but it goes through a ski area which made it less interesting for us. Admittedly it probably would not have gone across the ski slopes but still. Our plan was to take a lift up to the Rifugio to save some time and walk all the way to Schlüterhütte (aka Rifugio Genova) which would be the second night on the suggested staging.

Check out our original plan and rationale here: Walking Dolomites Alta Via 2 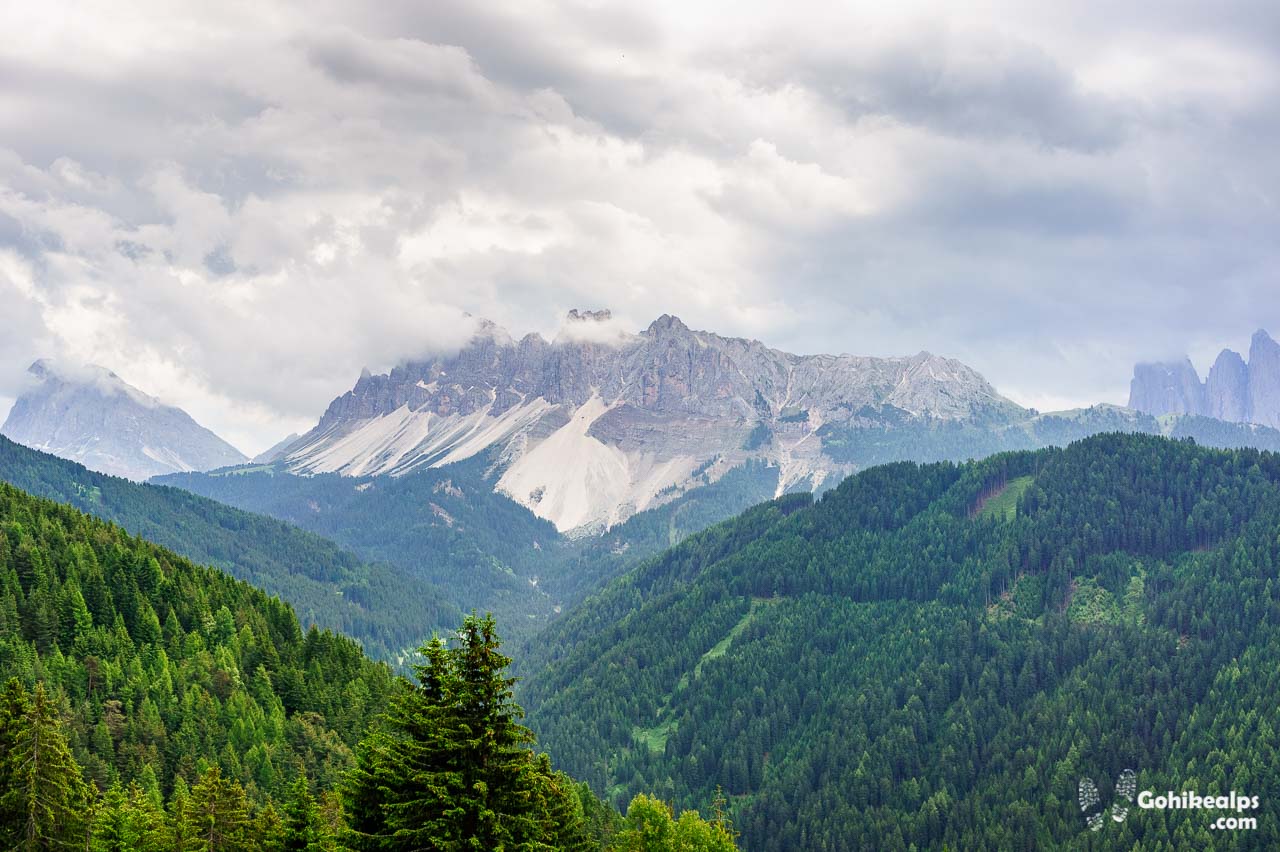 Waking up in Brixen we could not help but notice that it was very, very cloudy and that the weather forecast for the day was flat out terrible. It was going to rain all day. Nevertheless, after a really nice breakfast we decided to go anyway.

We were already delayed because of lost bags at Venice International Airport and were eager to get on the mountains. Besides, bad weather is why we have all the Gore-Tex gear anyway (check out the Ultimate Packing Guide).

Looking at the weather, we decided to take a short cut. We had already earlier decided that we would not walk the first part up to Rifugio Bressanone because it just wasn’t appealing to us, mainly because of the ski area. On a pretty day we would have missed out on exceptional scenery but now everything was clouded up so we would not have seen anything anyway.

We also wanted to cut down the walking distance a bit since walking on the mountain on narrow paths in heavy rain is tough and not very pleasant. It can be dangerous, too, but we judged from our maps that there would not be any great difficulties on the way. Furthermore, we wanted to make it to Schlüterhütte to catch up on our planned schedule.

If you have a car, make sure you figure out long-term parking beforehand. Don’t leave that for the morning you’re going. We arranged to park our rental car in a private facility provided by our hotel. I think we paid 7 or 8€ per day.

Check out hotels in Bressanone. I recommend booking in advance especially in high-season.

As far as the shortcut to a place called Plancios. I’m sure any respect I may have had from Alpine purists is now forever lost but we thought it was a reasonable choice for us on that day. There’s bus connections from Brixen railway station that take you up the mountain to St. Andrea where the base station of the Plose ski area is. That’s where we would have taken the lift up to Rifugio Bressanone according to our original plan.

From St. Andrea the bus continues to Plancios which is basically on the other side of the Plose mountain, at the other end of the ski area. Surprisignly, though, the bus stopped short of where we thought it was going. This was probably a seasonal thing and I think during the ski season the bus would have gone further.

No problem, though, it just ended being a very easy walk of about an hour and a half to a place called Ski Hütte. This, to my understanding, was the name of a lift but also a name for the place itself. In any case, there were a few secluded hotels.

Walking in the Rain

We took a coffee break in one of the hotels at Ski Hütte and that’s when the rain started. From thereon it rained continuously for the entire day. The next leg of the journey was walking over to Schatzerhütte (or Rifugio Schatzer). By the time we stopped there for lunch we were already completely soaked. While eating, we did seriously wonder if it made any sense to continue in the rain. Sense or no sense, we decided to continue.

Soon after Schatzerhütte we met up with the official Dolomites Alta Via 2 trail which came down from Plose. Thinking back, I’m not really sure if we had actually saved time taking the bus. It probably would have been about as quick if we had just taken the lift up Plose and walked downhill from there.

Then again, if it had been a clear day we would have chosen differently. And we would have taken the lift had we known the bus would not take us all the way to Ski Hütte. The latter was, of course, my oversight so no one to blame. Now continuing on the official Alta Via 2, the trail comes down to a road at Passo Rodella.

There’s places to stop here if you need a break. You need to walk on the road for a while, and then some time on a trail parallel to it. Eventually you get back on the proper trail. From there the trail starts climbing up towards Peitlerscharte (Forcella di Putia) and that’s also where you enter the Parco Naturale Puez Odle. This is, in my opinion, where the Dolomites Alta Via 2 really begins.

Once on Petlerscharte / Forcella di Putia, you will have an option to climb up the Peitlerkofel (Sass de Putia), the northernmost summit in the Dolomites. Unfortunately for us, this was not an option due to the weather but on a nice day we would have done it for sure.

From what I read, this would not have been a difficult climb, and there are cable secured portions (Via Ferrata) in the most exposed parts. The views are supposed to be exceptional and apparently you can see over 400 church spires from there. This is a very popular climb so I’m guessing in the high season it can get crowded, especially on weekends.

It’s a very easy walk from Peitlerscharte (Forcella di Putia) to Schlüterhütte (Rifugio Genova). There would have been beautiful south to Val Badia and the Puez-Odle massif but we saw none of it. It just continued to rain, the entire mountain was covered in clouds and there was literally nothing to see but the trail ahead.

Even though our outer layers probably kept most of the rain out, the climb up to Forcella di Putia was substantial and we were soaked from sweating alone. Even though Gore Tex breathes, there’s only so much it can do when you’re really at it.

Finally seeing Schlüterhütte / Rifugio Genova was a truly joyous moment. We were given a private room and there was a chance to take a very welcome warm shower. After showering, drying up and warming up, a hot dinner accompanied with wine was beyond comparison. There was no need to wait for sleep. 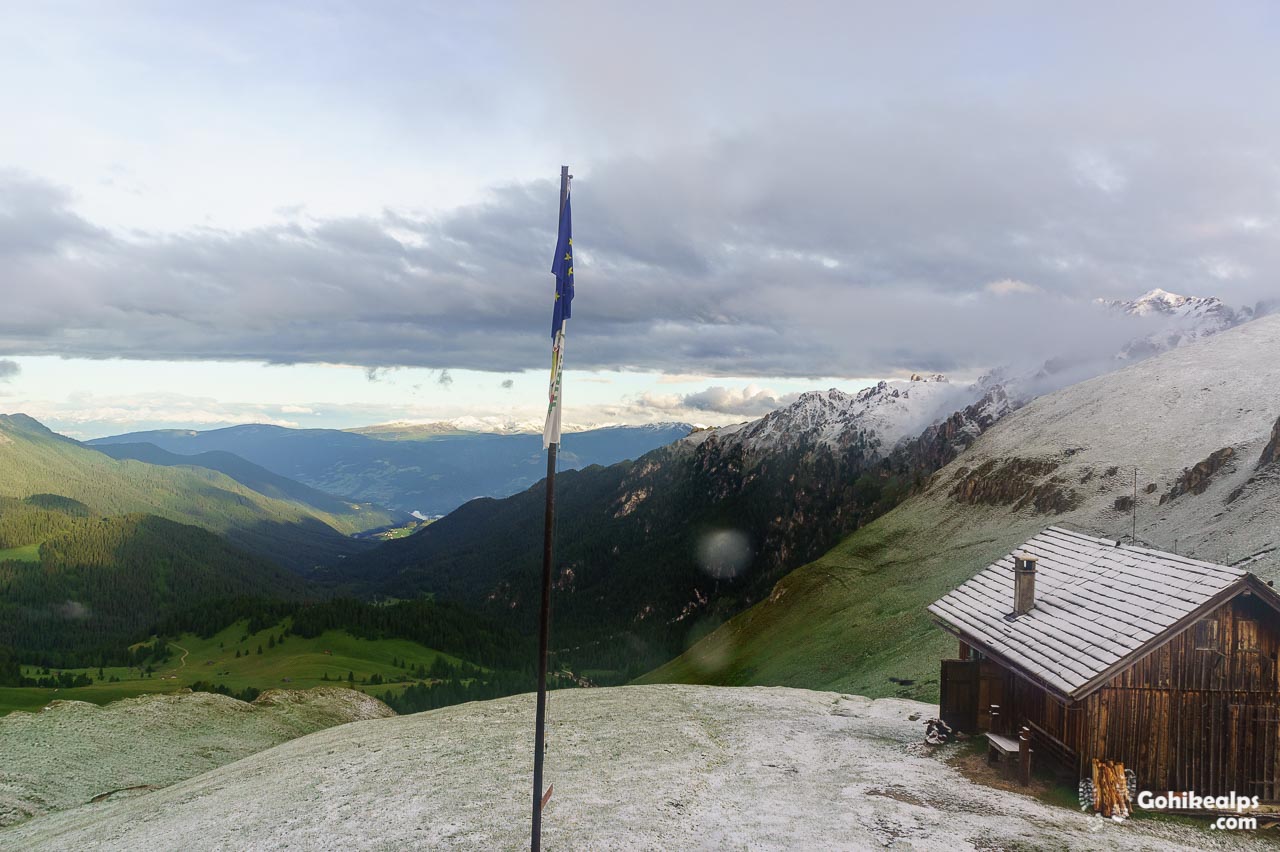 View from Sclhüterhütte in the Morning

One cannot choose the weather and today luck was not on our side. When out there, you take what you get and in our case it was a lot of rain. The day was a good reminder about the importance of proper clothing. You just need to have proper gear and layers in the mountains, there’s no way around it. The conditions were also a little tricky in that even though it rained and we were up in the mountains, it was not particularly cold. You don’t want to have too much clothing on, either, since you’ll be sweating anyway. In these conditions I normally only wear long-sleeved underwear under my Gore-Tex outer layers. I find this to be a fairly comfortable compromise since the long-sleeved underwear is against your skin and not the sometimes sticky outer layer – but you’re still not getting too hot with mid layers. That’s just my opinion, of course, but works for me. 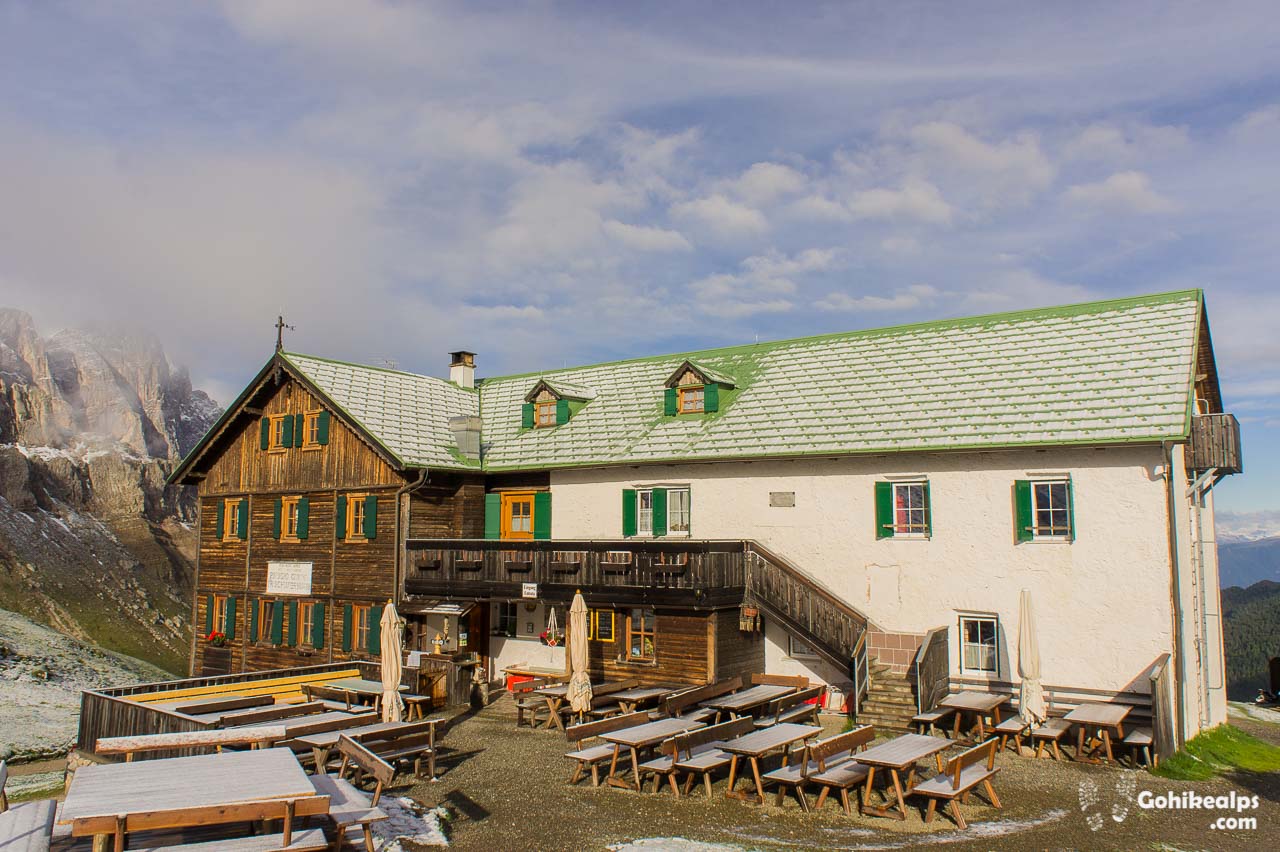 Rest of the Journey

Here’s the links to the rest of the Alta Via 2 series of posts:

Here’s also the link to Rifugio Genova / Schlüterhütte, I recommend you make a reservation before you go, especially if you’re hoping to get a private room. http://www.schlueterhuette.com/Schlueterhuette_en/Welcome.html