The Dolomites Alta Via 2 is probably the best trek we have ever done. The Dolomites are a truly unique mountain range and well deserve their UNESCO World Heritage designation. Alta Via 2 cuts right through some of the most beautiful parts. Highly recommended!

UPDATE: Due to popularity and demand, I recently wrote up a Planning Guide for the Alta Via 2. It’s very comprehensive and contains all the info you need to plan for this awesome trek. Please take a look here: https://gohikealps.com/alta-via-2-planning-guide/

About the Dolomites and Alta Via 2

The Dolomites are a mountain range area in the North East of Italy, a part of the so-called Southern Limestone Alps. In my humble opinion they are next to magical and boast some of the most beautiful scenery anywhere in the world I’ve been. It’s no wonder they’ve been designated a UNESCO World Heritage Site in 2007 (Click here for the UNESCO site describing the details and click here for Dolomites on Wikipedia) 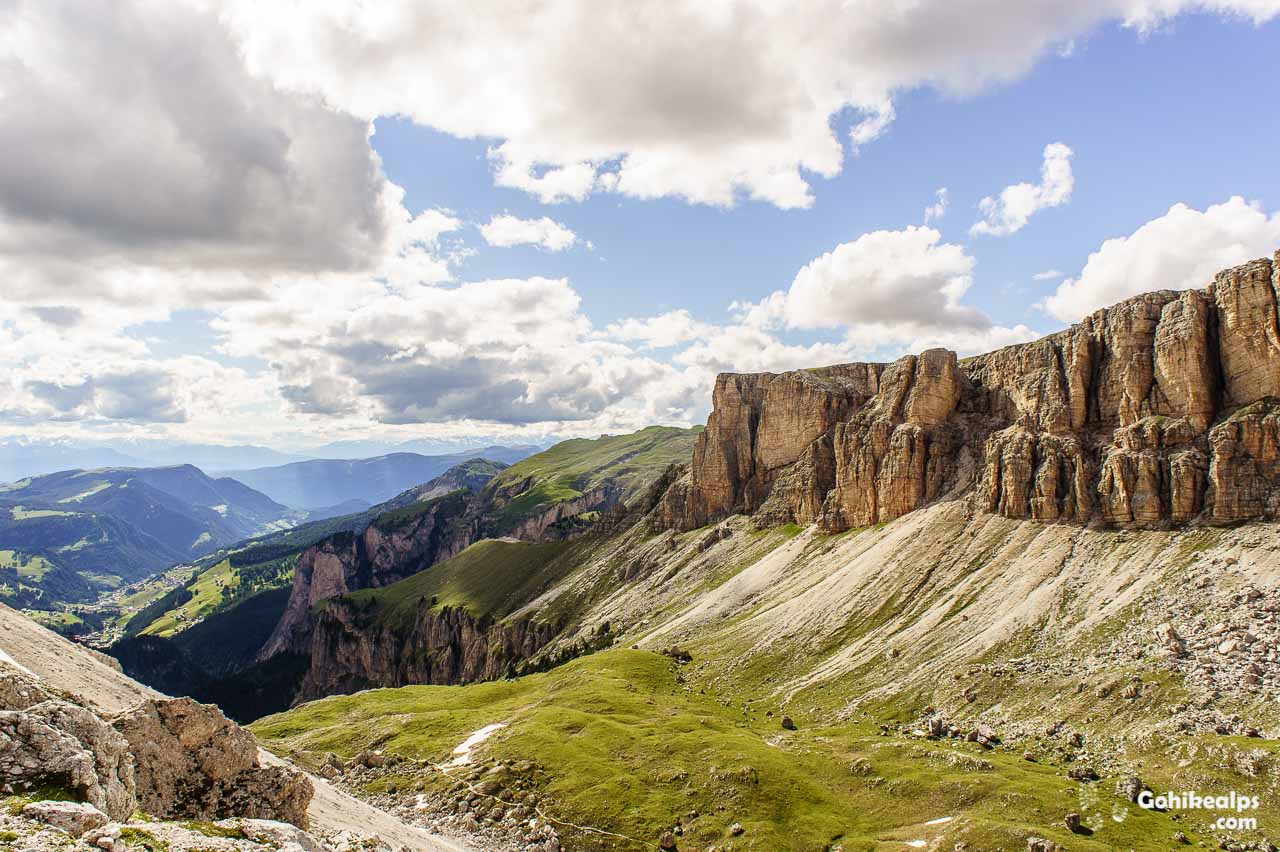 Val de Chedul and the path down to Selva Val Gardena

There’s a number of long distance trails across the range, called “alte vie”, numbered 1 through 6 (I’ve seen some sources cite 8 in total). Long distance means they generally take more than a week to complete from end to end. It’s a matter of opinion which are most beautiful and they vary in difficulty. There’s, of course, literature written on them and plenty of info on the Internet, too.

Alta Via 1 and 2 are the most popular. Alta Via 1 is said to be somewhat easier and apparently there’s more organized tour activity. We decided to go on Alta Via 2 mainly because it is considered more strenuous and, therefore, not as crowded. We were also somewhat familiar with the northern part of the trail from a skiing trip we had made to Val Gardena which is next to the Sella Group. On skis you’re able to ski around the entire Sella Group on a lift system called Sella Ronda but this time we, of course, wanted walk over it and not go around.

Alta Via 2 starts in Brixen (or Bressanone in Italian) and goes South about 160km (100 miles) to Feltre. It’s divided up to 13 stages so following that segmentation it would take 13 days to complete. We used Trekking in the Dolomites: Alta Via Routes 1 and 2, with Alta Via Routes 3-6 in Outline by Gillian Price (NOTE: Link takes you to Amazon!) as a planning guide and found it very useful. However, we wanted to do things our way just a bit:

Our Ambitious Alta Via 2 plan

We traveled to Italy at the end of June so it was well into summer. We had planned a 7 day trip from North to South that would have taken us from Brixen to Rifugio Rosetta, more than half way through the Alta Via 2:

I’ll admit the plan was somewhat ambitious. Comparing to the book we basically squeezed 8 days of walking into 6. We thought this was doable, though: we’re used to long stretches, are experienced in the mountains and are in fairly good shape. Furthermore, we did count on going up twice on lifts which really is something to consider if you plan something as strenuous as this. There’s no shame in it…

From Rifugio Rosetta the plan was to make our way back to Brixen using public transport. As it turns out, our plan didn’t quite work out. 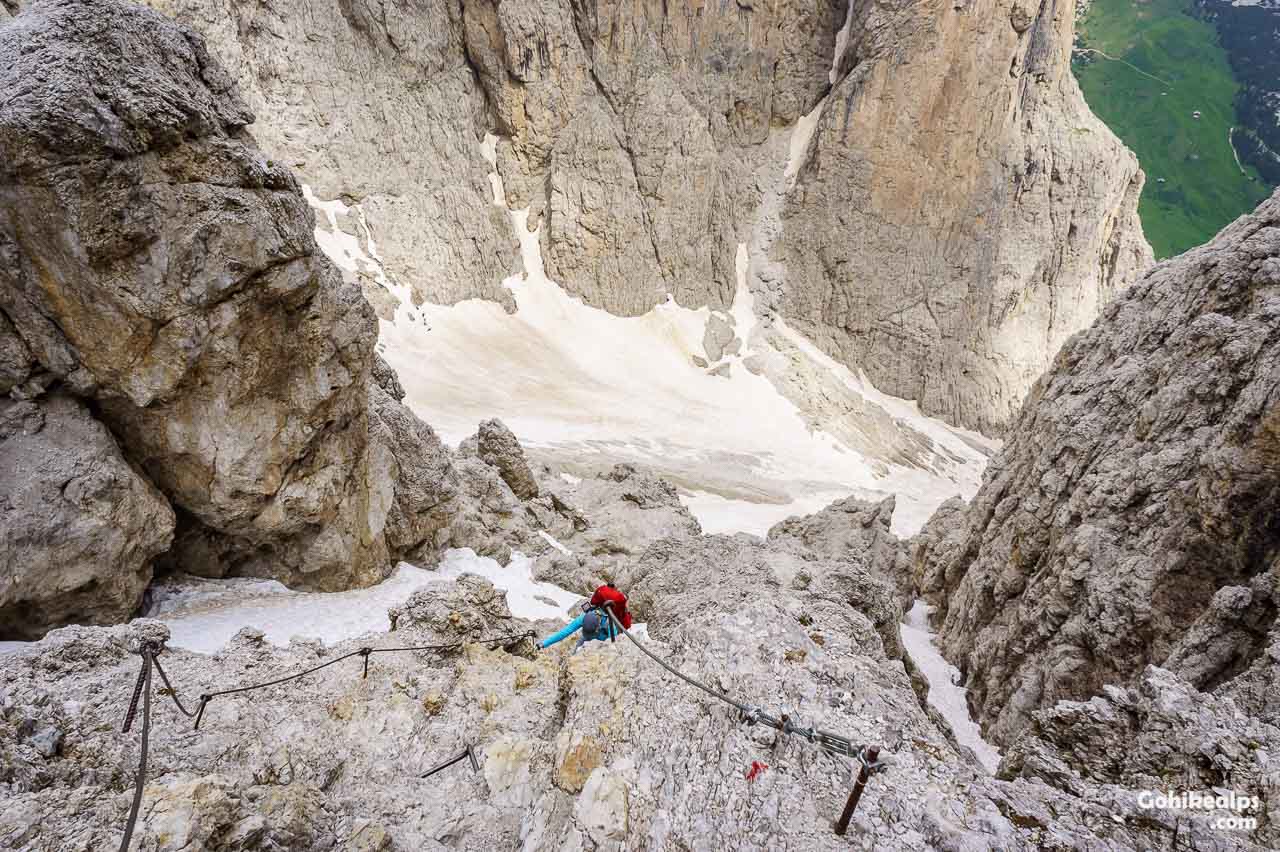 Climbing up to Rifugio Pisciado

Change of Plans – Lost Luggage and a Day in Venice

We flew into Venice in the morning and had expected to just pick up our rental car and be on our way to Brixen direct from the airport. We had planned to visit Venice on our way back because Venice, of course, is a place everybody should see.

Getting off the plane, we were greeted with beautiful weather but no luggage – my stuff was there but my wife’s was not. All of her gear was now out there, somewhere, and the lost luggage people at the airport had no idea whatsoever where her bag was or when, or if, it would arrive. They said they would call when they knew something but gave no sign as to when this might be.

Clearly a quick change of plan was necessary. We decided to stay in Venice and wait for the bag. We had a car and driving into Venice was not very practical – a boat would be better for that. We got a room in Mestre, which is just across the water from Venice on the mainland. It was fairly painless to find parking and a reasonably priced room from there and then go to Venice by bus. This is what we did and spent a nice day and evening in Venice.

The day in Venice was away from our hiking, though. The airport people never got back to us so we called them every few hours. Every time we called, same response: no info. Our frustration grew since we now had no idea when we would be able to get on our way. Even though it was nice to see Venice, we did not want to spend more time there since it was eating away into our Alta Via 2. Neither was it a feasible option to just leave and go buy all new gear when logic said the bag would be found eventually.

The next day came along and still no call from the airport. We, however, continued calling back at regular intervals. We had already done shopping in Mestre for some essentials when all of a sudden on our third or fourth call that day, the missing bag had appeared from somewhere.

Once we finally had all our stuff, we were eager to get into the mountains. It was already afternoon so there was no way for us to start our hike that day so we took our time on small, scenic roads across to the A22. The A22 is a major highway that goes north to Tirol in Austria via the famous Brenner Pass, while Brixen is on the Italian side in Südtirol. Once in Brixen, after some asking around we were able to get a room at a downtown hotel and spent a nice evening in historical Brixen.

By the way, we were told that the locals call the town Brixen, not Bressanone and German was the main language, not Italian. This seems to be the case in many parts of Südtirol. 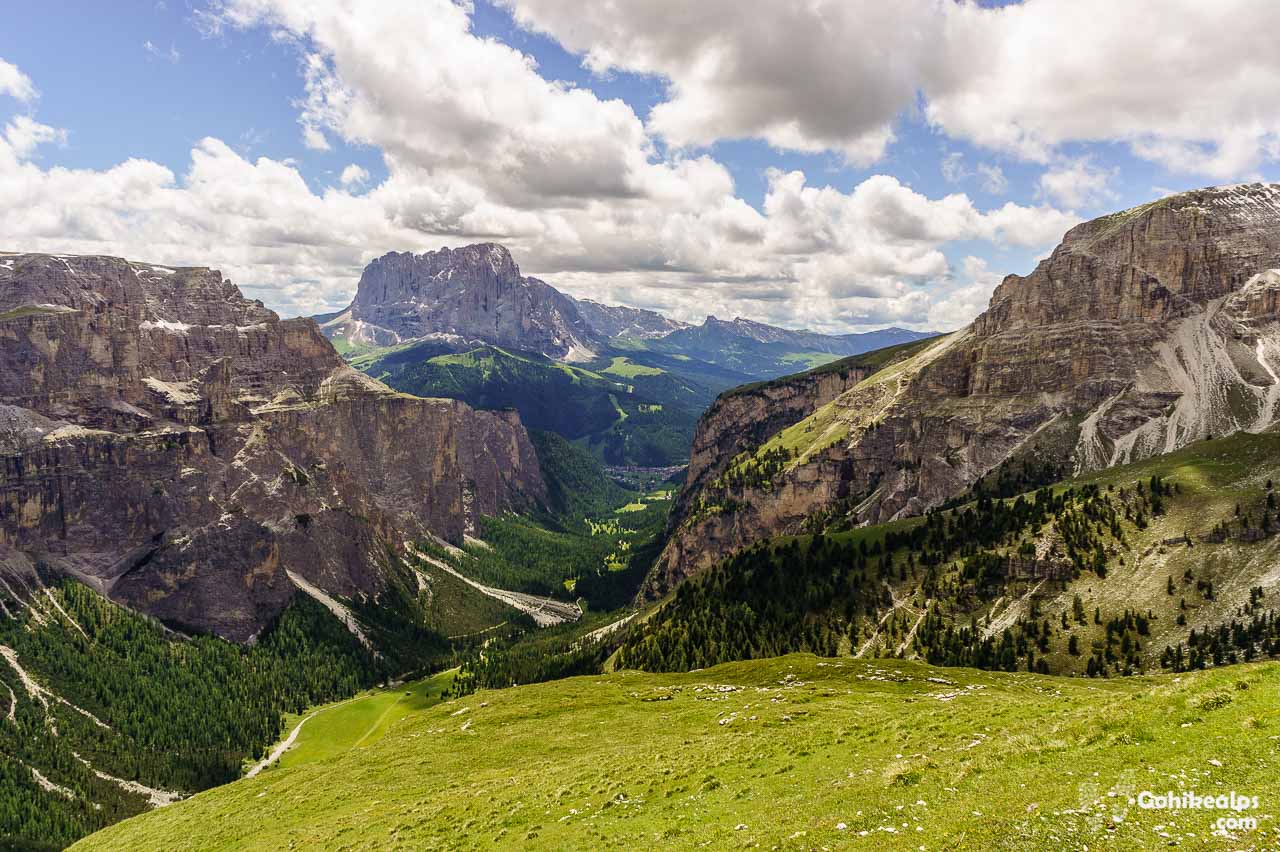 Dolomites Alta Via 2 for us… Brixen to Moena.

We spent a night in Brixen and with some help from our friendly hotel host were able to find reasonably priced parking for our car. Because of the time we had lost due to the lost luggage, we needed to change our plan. Also the weather forecast for our first day in the mountains was lousy, it was going to rain all day.

As often happens, the reality was not exactly as planned. This is always something to keep in mind in the mountains. Weather is what it is and there’s nothing you can do about it. And there’s not much you can do about the airline losing your stuff either. Lesson learned: leave some slack into your plans! 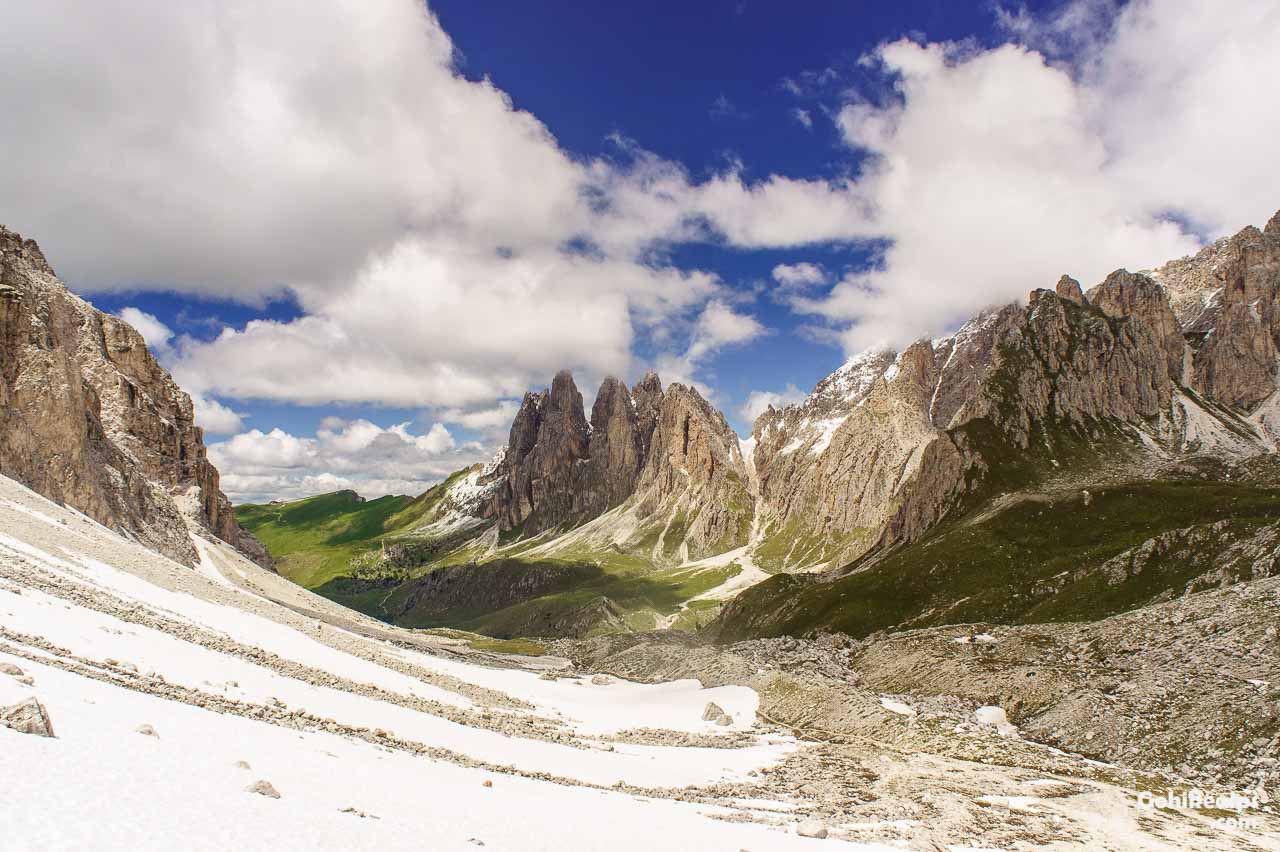 View from Forc. de Sieles to Seceda on Alta Via 2

Hiking the Dolomites Alta Via 2, albeit only about half of it and even that with some difficulties, was one of the best trips I’ve ever taken. You can’t really do anything about the weather, it is what it is. I do have to say, though, I was surprised at the amount of snow still in the mountains. We were there the first week of July and I would have expected less. Maybe there had been an exceptionally snowy winter which caused this. It does happen and other people have been caught in snow this time of year, too.

The walk was strenuous but, then again, we had an ambitious plan with a lot of added kilometers per day compared to the suggested staging. Had there been better weather, I think we would have been able to make our original plan happen but it would have been a stretch and we would have had to take those couple of cable cars up. 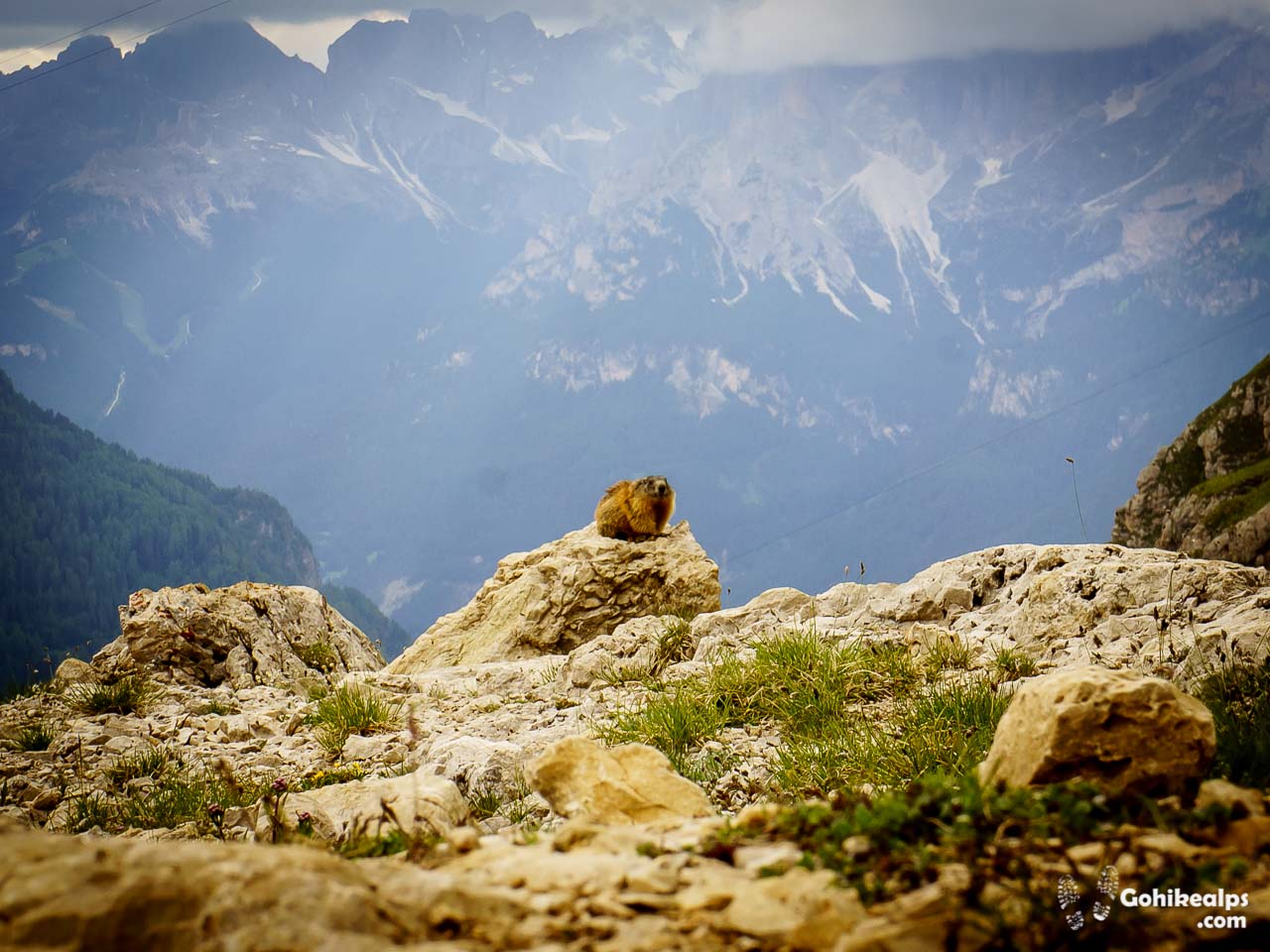 To do the Dolomites Alta Via 2

Start the read from our first day on the trail here: Dolomites Alta Via 2, Day 1: Brixen to Schlüterhütte