Hiking in Austria: Mayrhofen to Ahorn and Back

Home » Austria » Hiking in Austria: Mayrhofen to Ahorn and Back 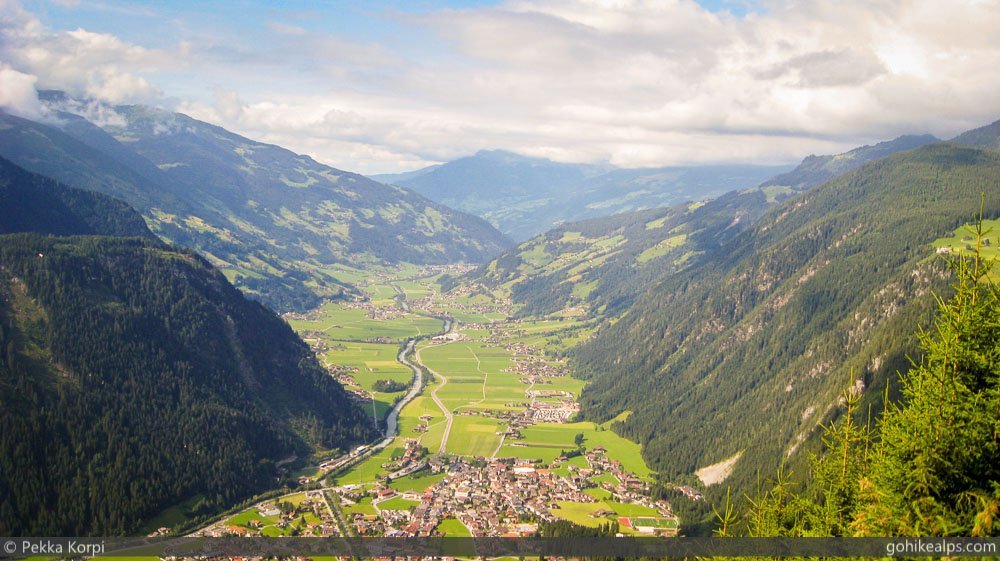 A really great place to start hiking in Austria is Mayrhofen. It’s very easy to get to either by car or train direct from Munich airport or Innsbruck. The town itself is big enough that you will find all the necessities you need and much more. It’s a very popular winter destination and all the infrastructure is built to accommodate the skiing crowds, which means that during the summer with fewer people, you will find very reasonably prices hotels and other accommodation. As for walking, hiking and trekking: there’s a lot.

Once in Mayrhofen, a nice “warm up” hike is to walk up from the town to Ahorn and beyond. Ahorn is right above Mayrhofen so there’s no need to drive anywhere, you can just start walking. There’s a ski area on Ahorn so you do have an option to ride up the mountain on the Ahornbahn and continue from there. I recommend doing that if you don’t feel like sweating but still want to enjoy the views. Then again, the climb is what gets you warmed up…

We had arrived in Mayrhofen the night before and just wanted to get going. The weather wasn’t very good and we wanted something relatively painless for our first day. It was cloudy with occasional showers so we knew beforehand we would not get the best views. Luckily the weather did clear up when we walked down, though. 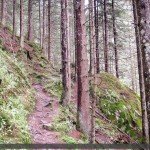 In the Forest Above Mayrhofen 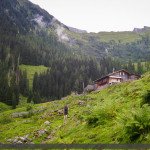 Coming up to Alpenrose 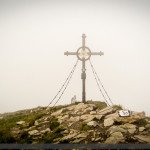 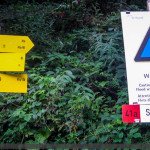 View to Zillertal from Ahorn

Hiking up to Ahorn

There’s a few options to go up. We chose trail number 42 which starts at the eastern end of Mayrhofen. We wanted to get on a proper trail (not a road) and we wanted to avoid the ski area going up. This trail starts at about 700 meters and in the beginning part you will walk in forest. It’s pretty steep but not particularly difficult. As you go up, you eventually get out of the forest and on to the pastures. There you will find restaurant Alpenrose which is a nice place to take a small break. The hike to Alpenrose took us about 1½ hours. The altitude difference to that point is around 750 meters (2500 feet).

From Alpenrose the trail continues up and eventually you will come at a trail crossing where you can choose to continue up to Edelhütte or west to the Ahorn ski area. We chose to go to Ahorn because of the weather, but on a nice day I would recommend going all the way to Edelhütte. (Check out the Edelhütte here)

From the Ahorn ski area and we climbed up to Filzenkogel at 2227 meters (7300 ft). On a nicer day the views would have been spectacular but on the cloudy day that we had we saw a lot of, well, clouds.

Back Down to Mayrhofen via Stillupklamm

Once we were done enjoying the cloudy views from Filzenkogel, we began our long walk down back to Mayrhofen. Once back at Ahorn, it was a choice of going back where we came from or doing a round trip. We didn’t want to go down the same route and decided to walk down the Filzebweg (a trail that goes down to the reservoir at Stillupgrund, a valley south of Mayrhofen. However, we somehow managed to miss the start of the trail and did not want to go back up to find it. Instead, we just continued down a gravel road that lead down from Ahorn to Mayrhofen (marked as trail 46).

The walk down was uneventful. The weather did clear up a little so we finally got some sun and even some views down the Zillertal and west towards the town of Finkenberg. After the long walk down the road, at the end it’s worth it to make a small detour to Stillupklamm. There’s a waterfall and an impressive gorge. At the end you can witness hydropower being generated at Mayrhofen’s hydro power plant.

Even though on a nice day the views are great, compared to many other hikes that are more “in the wilderness” this round trip is not in my opinion spectacular. It is a nice start before more demanding trails. The great thing is, and why I think it’s a nice starter is that you’re very close to Mayrhofen at all times – you really have to try hard to get completely lost. It’s also easy to make it easier if you want to avoid the climb: just go up to Ahorn on the Ahornbahn, enjoy the view and maybe hike up to Edelhütte or Filzenkogel from there. Or, if you want to avoid the descent, go down on the Ahornbahn.

This hike is best combined with other hikes in the Mayrhofen and Zillertal region. Mayrhofen is a great base camp for a bunch of interesting routes, including the Berliner High Trail. Check out our trips to Zillergrund and Schlegeisspeicher (Post coming up soon…), both based out of Mayrhofen.

To go on this hike

Pekka is an Alpine Enthusiast both in summer and winter, hiking and skiing as much as possible. He established gohikealps.com to help hikers from around the world discover the Alps - through Inspiration and Advice.

Join our mailing list to get updates from Gohikealps! You'll also get out 1-page printable Packing List for the Alps. It will save you a headache when it's time to go.

Thanks for subscribing - you'll get an email from us soon!